Just like a fork, a rear shock has two key elements: a spring (either coil or air) and a damper. Remember, the spring gives your shock its resisting force (squish) and the damper regulates how quickly that spring compresses (squishes) and rebounds (un-squishes, extends). A major difference between a fork and shock is that usually* in a fork, the spring components are in one stanchion and the damping components are in the other. Because space is a luxury that the rear shock lacks, the damper is usually encapsulated by the spring.

To kick things off, check out this overview of a common air shock (Fox Float), fully dissected.

Air springs are most common on XC, trail, and all-mountain bikes due to their lighter weight and ease of adjustment (i.e. the ability to easily adjust spring weight for efficiency and feel in variable conditions). Coil springs, on the other hand, are most popular among the DH crowd—where efficiency is less of an issue—because of their unmatched small bump sensitivity and bomb-proof durability.

A shock damper body (sometimes referred to as a stanchion on air shocks) serves two purposes. First, the external surface of the damper body acts as the sealing surface for the gas contained in air spring, which is why it is very important to keep this area clean and scratch-free. Second, the damper body internally houses your damper fluid, which is the medium that allows for control of the compression and rebound characteristics.

Here is a breakdown of what goes on inside a shock damper body.

These components allow a shock to literally “put a damper” on what would otherwise be an out of control spring and allow for rear wheel traction through the rough stuff. Depending on the type of shock a user can manipulate different performance characteristics of the damper using the controls:

Shock air springs are canisters, which have two chambers, a positive and a negative. They come in many different shapes and sizes, the different design characteristics influence the spring rate and performance of the shock. The air can threads directly into the head of the shock (the part that contains the controls and valve stem), forming the air system’s upper seal.

Other Bits and Pieces

Email us with your questions or to request service and we’ll get back to your right away. 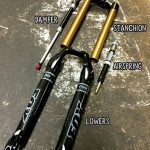